Camille Pissarro French “Papa” of impressionism from the Antilles

Camille Pissarro was born in a small port town on the island of Saint Thomas in the Caribbean sea. Camille Pissarro’s family settled in the Danish colony of St. Thomas a few years before Camille was born. Camille Pissarro’s mother was a Creole woman, she married with Jewish man who  sold hardwarean. Camille’s childhood was spent in the West Indies. He arrived in Paris at the age of eleven (in 1841): his parents sent him there to study.

The Director of the pension Passy immediately drew attention to the artistic talent of the boy and advised him to develop it. Camille returned to St. Thomas when he was seventeen years old. His father immediately sent him to trade in a shop, and the young man tried to combine work behind the counter and drawing classes for five years. 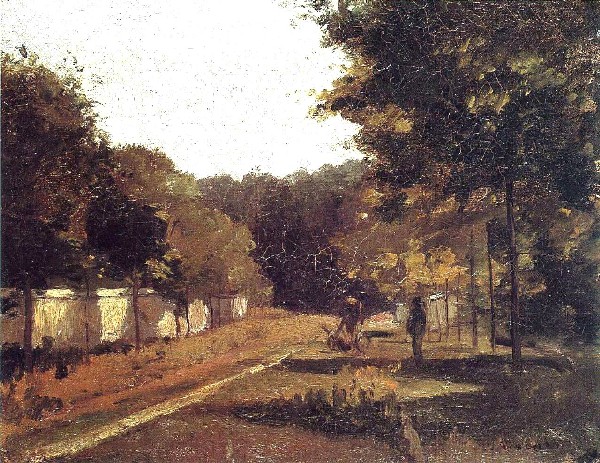 However, for a longer period of time, his patience was not enough. Camille openly told his father that he had no intention of becoming a merchant, but would draw, and became an apprentice to the Danish artist Fritz Melby. The Dane was only a couple of years older than Camille, but unlike him, he had excellent painting skills.

Camille Pissarro quotes of that time: “In 1852, I had a well-paid job on St. Thomas, but I could not stand it there. Without thinking twice, I gave up everything and fled to Caracas to completely abandon the bourgeois life.”

Two years later, Camille would return to his native island, only to leave again — for France, and this time for good. 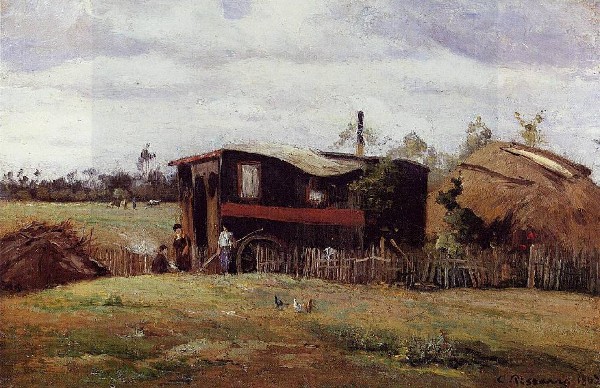 He was admitted to the Academy of Suis, where Camille acquired a solid professional knowledge, but his creative manner was not particularly affected by this training. Pissarro generally had the property of learning from everything and from everyone. But Camille’s first landscapes painted in his own manner. 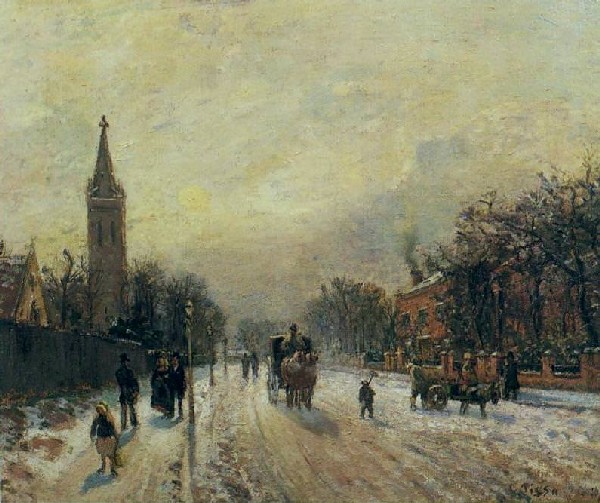 Pissarro learned a lot in the realism of Courbet, but his idol was the Corot. The famous landscape painter allowed the young man to indicate in the exhibition catalogues that he was a student of Corot. For the first time, Camille Pissarro’s paintings, in particular “Landscape in Montmorency”, were exhibited at The Paris salon in 1857. His work was a success, but good relations with the jury of the Salon Pissarro did not develop. 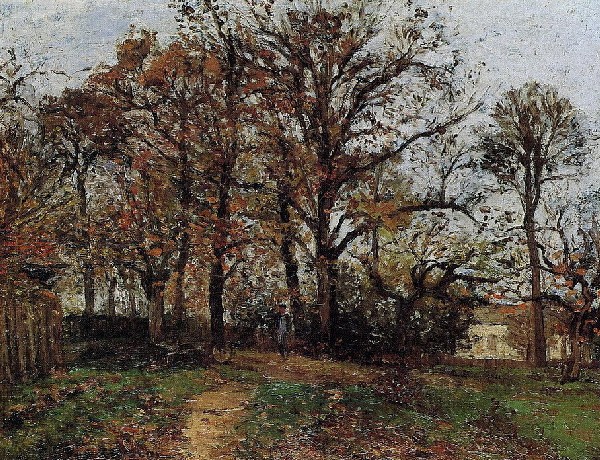 Pissarro also exhibited at the Salon Les Miserables, and around the same time met with future Impressionists: Claude Monet, Alfred Sisley, Frederick Basil, Edouard Manet. Perhaps, the principles of impressionism, he began to apply when writing his works even before other colleagues. Light and air-these are the main characters of his paintings at that time. 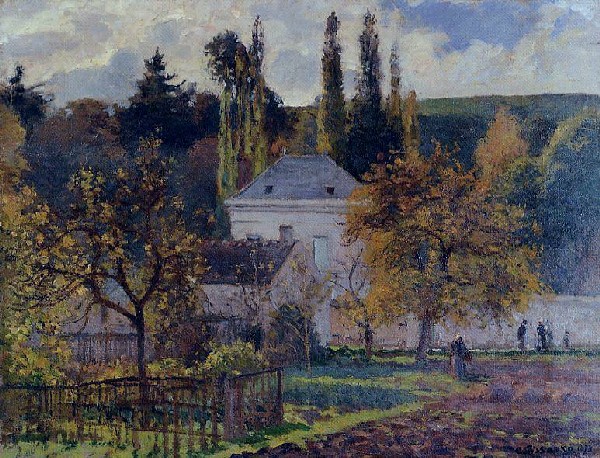 Gradually, Camille’s palette brightened, freeing itself from Corot’s influence. Pissarro wrote in increasingly broad and plastic strokes. PONTOISE, located on the Oise river, became his favorite place of plein air for many years. The artist boldly diluted cold green and blue tones with warm tones. The sky and green looked even more ethereal from the smears of red and yellow that Pissarro had applied to a picture of people or roof tiles. 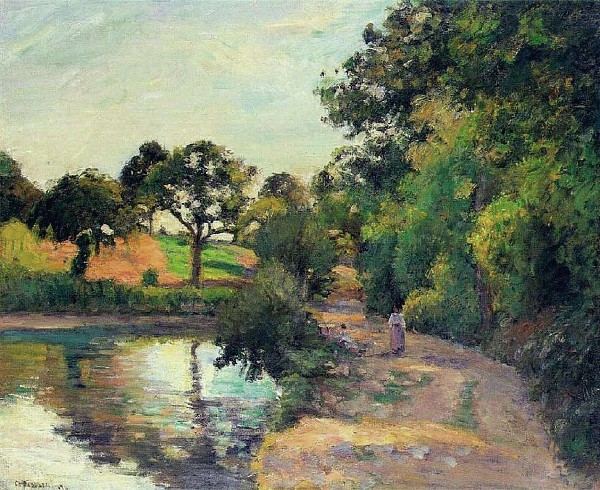 In 1869, Camille and his wife Julie Vellay moved to Louvenciennes, but the outbreak of the Franco-Prussian war forced him, like many other painters, to abandon all property and flee, first to Brittany, and then to London.

Camille Pissarro quotes in 1870, he wrote to his friend Theodore Dure: “I will not stay here; only abroad you feel how great, beautiful and hospitable France is. It’s different here! Here you meet only indifference, contempt, even rudeness. Artists here are jealous and do not trust each other. There is no art here, everything is a matter of Commerce.” 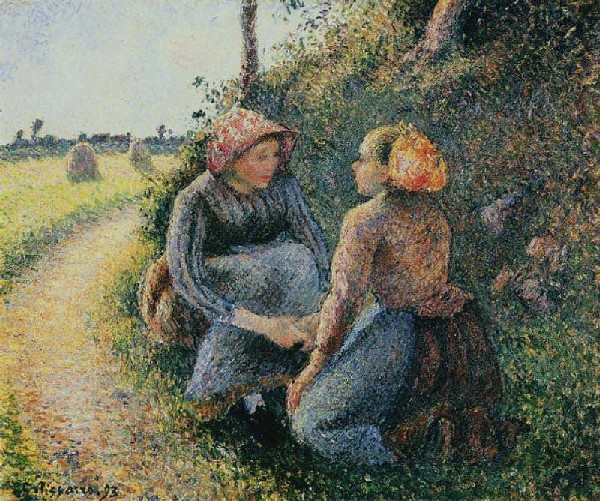 However, in London, Pissarro was waiting for another meeting — with Claude Monet.

The friends were happy, even though they were far from home, but they were together, both admiring the views of London and moth to work — what more could they want? They went to museums, studied the paintings of Turner, Gainsborough, Lawrence and constable, and wrote a lot, Monet – in the parks, and Pissarro — in the suburbs of Norwood, where he tried to capture and embody on canvas the effect of fog, snow and the coming spring. 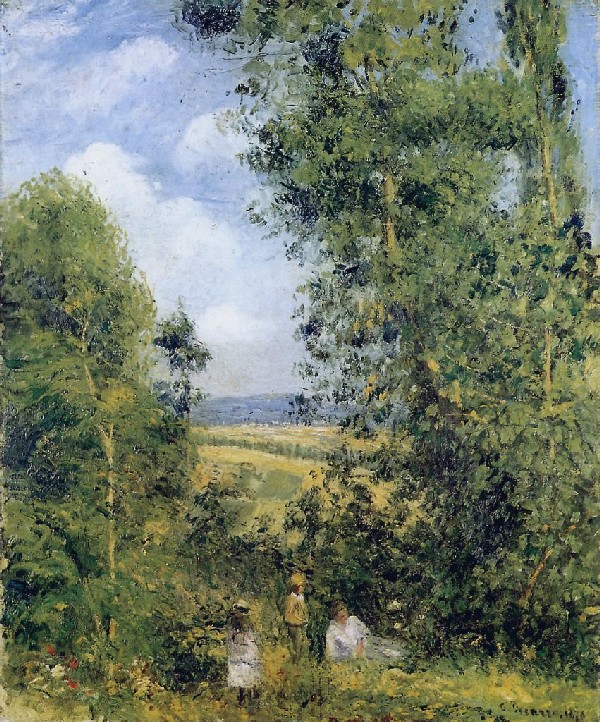 Camille Pissarro quotes about impressionism: “The Impressionists are on the right path, their art is healthy, it is based on feelings and it is honest” (K. Pissarro)

After the war, Camille returned to PONTOISE. Like Argenteuil for Monet, this suburb of Paris became for Pissarro the place where he led the creative search and realized his ideas. An open and balanced, Pissarro was always attracted people and with the time around him began to gather creative young people, artists, among whom were Paul Cézanne and Armand Gilomen.

Pissarro became particularly friendly in Cezanne, and in the paintings of that period, the heyday for Camille, clearly shows the influence that the painters had on each other. 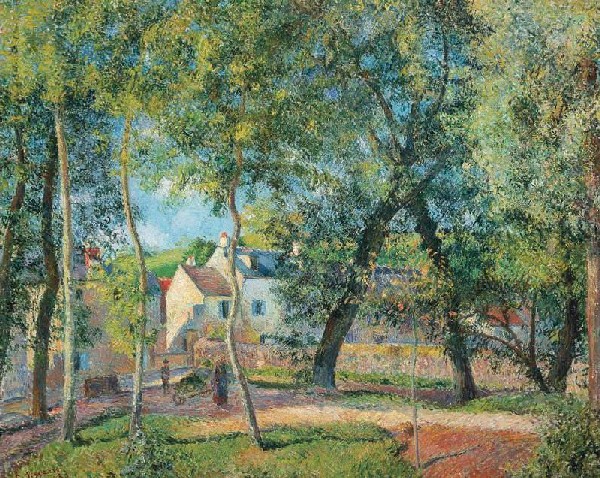 The principles of Pissarro’s work were simple: he was looking for nature by temperament, shape and color interested him much more than the actual drawing. He wrote, trying to highlight the most important thing in the nature seen, to keep and convey an instant impression of what he saw. Pissarro taught his young comrades how to work, covering the entire canvas at once and gradually filling it up until there was nothing left to add. 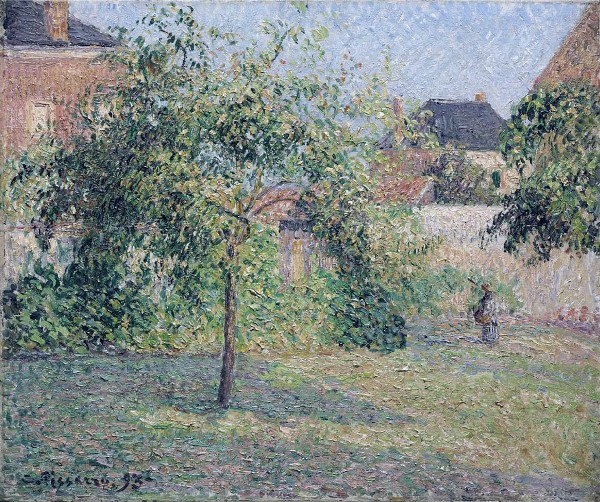 During these years, his well-recognized style was finally formed. He has a deep understanding of nature and the power of the brush, which the artist handled freely and freely. He painted not only landscapes but also people, made sketches of peasant life. 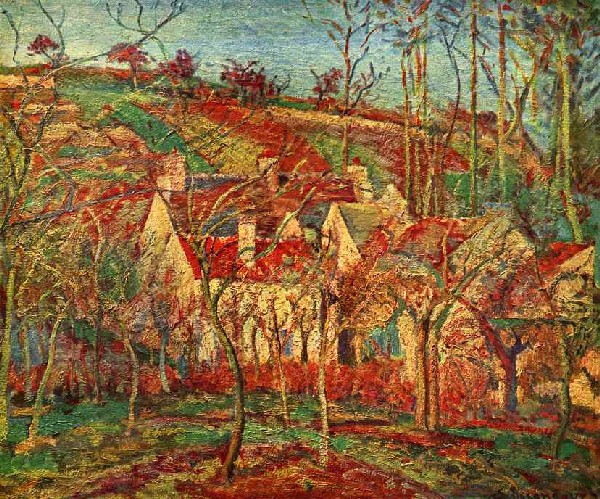 “The road to Louvecienne” (1870),” Entrance to the village “(1872),” harvest “(1876),” Red roofs “(1877),” Father melon for sawing wood ” (1879) — you can continue to list the masterpieces of those years. Subtle mastery of the technique of gradation of one color, “inherited” from Corot, courage in contrasting tones, sustained, the thoughtful rhythm of paintings-all says that we have the work of an already formed master. 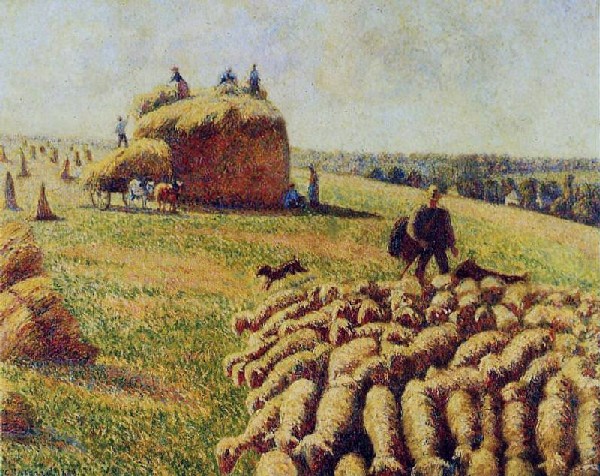 The artist has always done a lot to recognize impressionism, was able to settle almost any conflict, helped, supported, fussed… He is the only one of the Impressionists who took part in all eight exhibitions organized by them. He was the eldest in the impressionist community, and was affectionately known as “Papa Pissarro,” and despite their differences, everyone treated him with equal warmth. 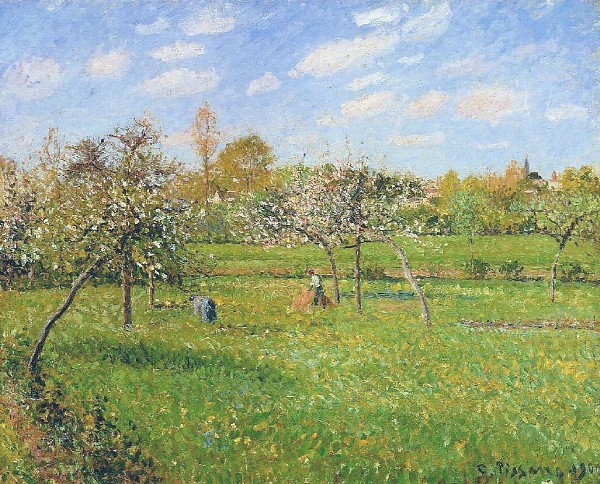 But Camille had to take care of his wife, his parents ‘ former maid, and seven children. If Pissarro didn’t work, he spent days looking for buyers for his paintings. In the end, he was lucky. Collector Paul Durand-Ruel, who once bought two of his paintings, signed a contract with Pissarro for the monopoly right to sell his works.

The material problems of a large family were solved. And only in 1901, the painter wanted to regain the right to freely dispose of paintings. 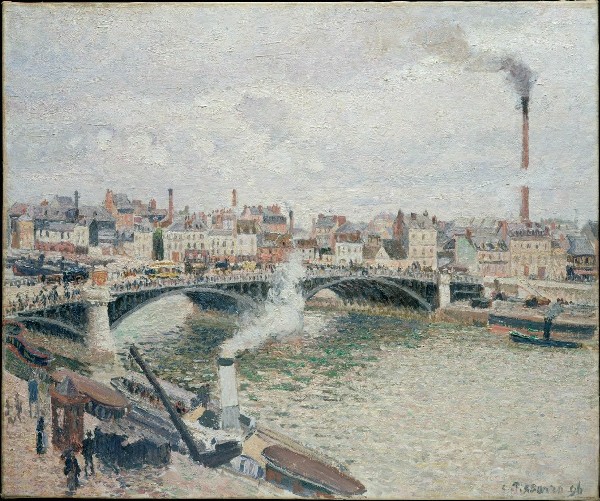 Always in active creative search, Camille Pissarro remained so until the very end of his life. At the age of fifty-five, the artist was not afraid to give up not only the established but also profitable manner of writing, to try his hand in a new direction-pointillism. The neo-Impressionists Georges Seurat and Paul Signac worked in this manner.

In addition to the purely professional risk, Papa Pissarro was not afraid of the wrath of his friends- Monet, Sisley and Renoir indignantly condemned him for deviating from their General artistic principles and did not want to be exhibited with pointillists. Camille Pissarro pointillism 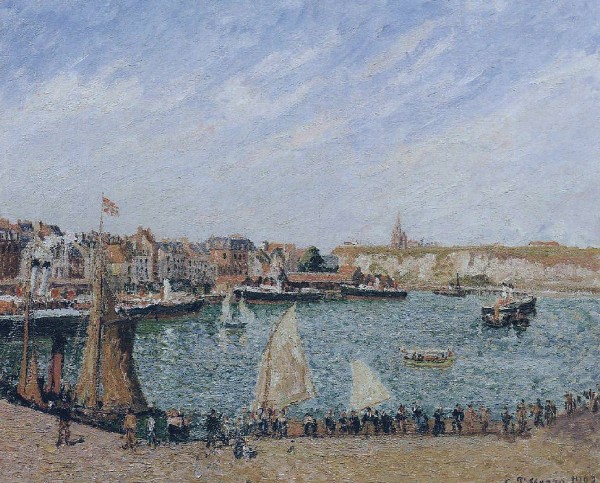 However, Camille Pissarro insisted that the paintings of Seurat and Signac, as well as his own, and the work of his son Lucien, who wrote in the same manner, were accepted for the Eighth impressionist exhibition, although they were shown in a separate room.

Working with pure color fascinated and fascinated the master, but very soon he realized that he still did not need only a point to express his emotions through it — he needed a smear. Unable to find another way out, in 1889 Pissarro abandoned pointillism and returned to his former manner. 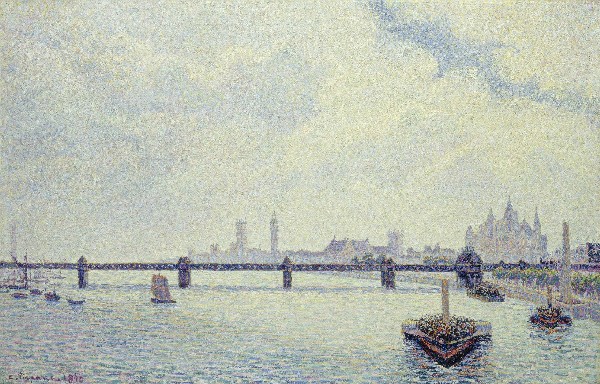 In 1892, Camille Pissarro made a trip to England, from where he brought a number of fine works, including “Regent’s Park” (1892) and “London Park” (1892). On his return, at the age of sixty-seven, he was inspired by the example of Claude Monet, who began to write his famous series: “Haystacks”, “Japanese bridge”, “Rouen Cathedral”. Despite his failing eyesight, Pissarro created a remarkable series of views of Paris’s Boulevard Montmartre. 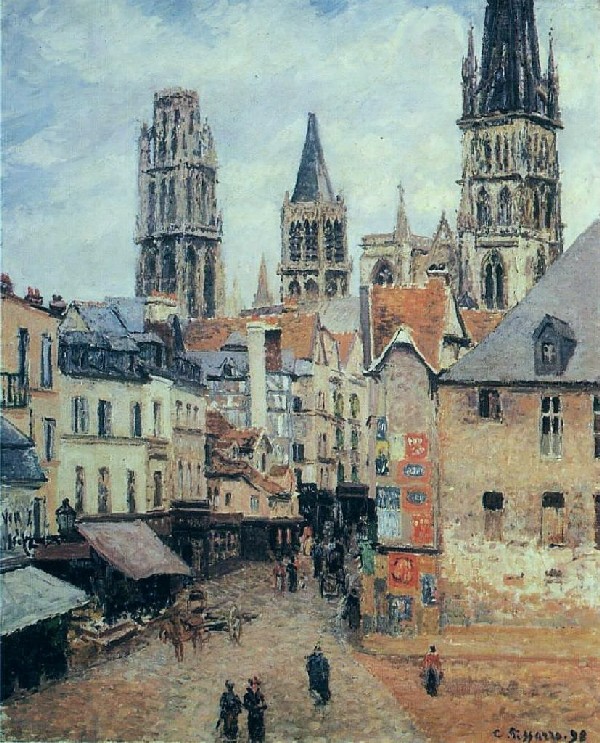 It seemed that the aging painter would never lose interest and attraction to everything new. In his later years, Pissarro tried his hand at lithography and etching, and again succeeded, although he said that he did not understand what attracted the viewer “these shapeless trial etchings.” 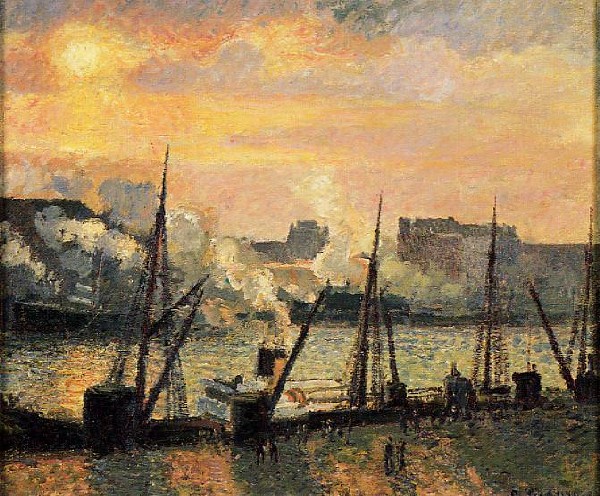 During his long creative life, Camille Pissarro did not receive any awards from the state, and none of his paintings were bought by official institutions. But what more important was that his undoubted talent was recognized not only by friends, but also by rival artists, representatives of other directions.

After the death of Camille Pissarro, the symbolist Charles Maurice said: “in his person, French art lost one of the outstanding painters and graphic artists of the XIX century” – perhaps the most worthy epitaph.