Edouard Manet – 7 interesting facts about life of the great artist

Edouard Manet is the first modern artist. This was the view of his contemporaries and this view has not changed today as well. It was Manet who played a main in the renewal of the pictorial system of Western art.

Edgar Degas, said at Manet’s funeral that his gigantic scale as an artist could not be conscious by contemporaries. We present to your attention 7 interesting facts about the life of the artist.

1. Edouard Manet was born into a wealthy family and his uncle contributed to passion for painting

Edouard Manet was born into a rich and intelligent family. His grandfather, Clement Manet, was a landowner who built dams. The artist’s father, Auguste Manet, was educated as a lawyer and worked as head of the Department in the Ministry of justice of France, was an adviser at the court.

Mother, Eugenie-Desiree Fournier, was from an intelligent family. Her father, Jose-Antoine-Nemo Fournier, was Consul in Gothenburg, and her godfather was king Charles XIII of Sweden. 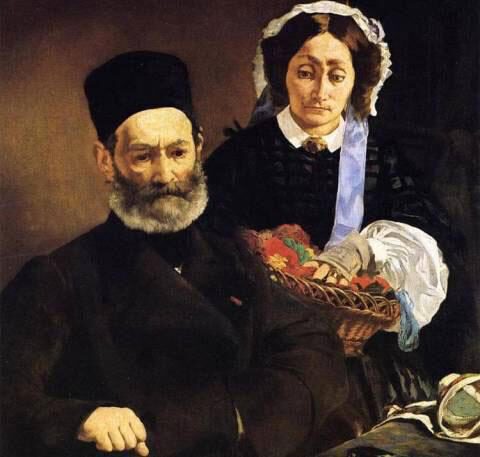 Edward always loved his home. The boy especially liked when his uncle (his mother’s brother), Colonel Edmond-Edouard Fournier, came to them with his wife.

Uncle was a good-natured little fat man, he would take out a notebook and make small sketches of the people sitting by the fire. Edward watched his uncle, even daring to make a few strokes on the paper himself. 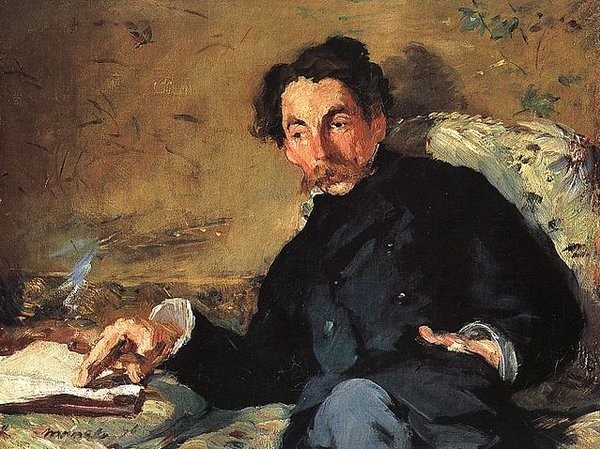 His parents wanted Edward to continue his father’s way and build a career as a lawyer. However, the only thing that attracted young Manet was painting. His uncle Fournier, who was interested in art, helped him in this hobby.

When he was often at his sister’s house, he go  with her children to the Louvre every Sundays. And he notesed that the older nephew Edward was not just looking at the paintings in the Museum, but with an album and a pencil in his hands was making some sketches.

Fournier tried to talk with Auguste Manet to allow his son to attend optional drawing courses at the College. But father didn’t want to talk about it; he wanted a legal profession for all three of his sons.

Then his uncle went to the headmaster of the College and paid for additional drawing lessons for his nephew on his own money. 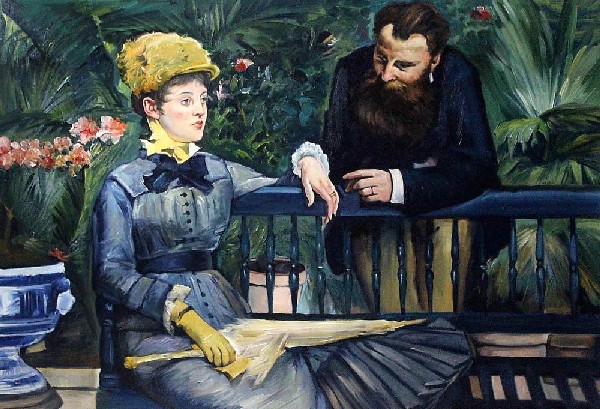 2. Edouard Manet wanted to be a sailor

His father accepted that the eldest son did not want to become a lawyer, and chose the lesser of two evils – it is better to go to a naval school than to become an artist.

Edward passed the entrance exams to the Maritime school, but failed. He decided that he would prepare more well and enter next year. As a preparation, he was allowed to go on a study trip. 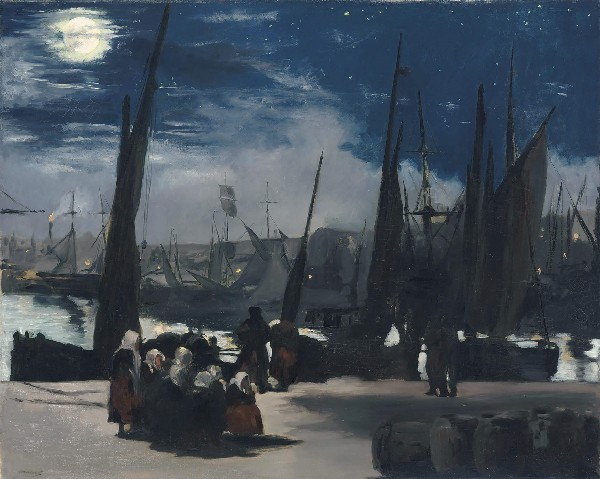 In December 1848, Manet a cabin boy went on Board a sailing ship “Havre and Guadeloupe”. Swimming across the Atlantic ocean and stay in Brazil has completely changed his perception of the world. Edouard’s entire upbringing took place in a bourgeois environment under a smoky Parisian sky. 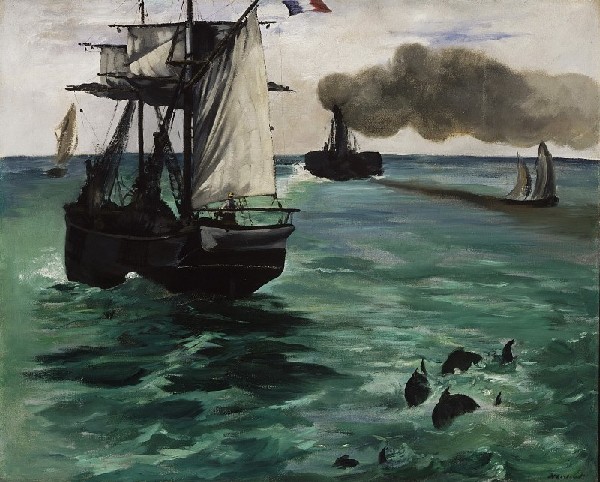 And now the guy opened the Sunny expanses of tropical countries, and the surrounding reality shone with colorful colors. The wild nature had struck him to the core.He had never seen such a riot of color in his life. Manet realized that he would like to learn how to transfer everything seen in real life – on canvas. 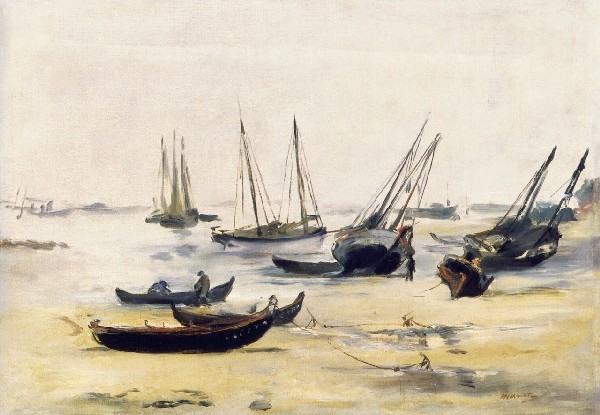 When he returned to France, his traveling suitcase was full of pencil sketches. This journey across the ocean later played an important role in the artist’s work. Approximately one-tenth of all his paintings are seascapes.

Edward made another attempt to enter the Maritime school, but again it was unsuccessful. But this time he did not have the same enthusiasm. 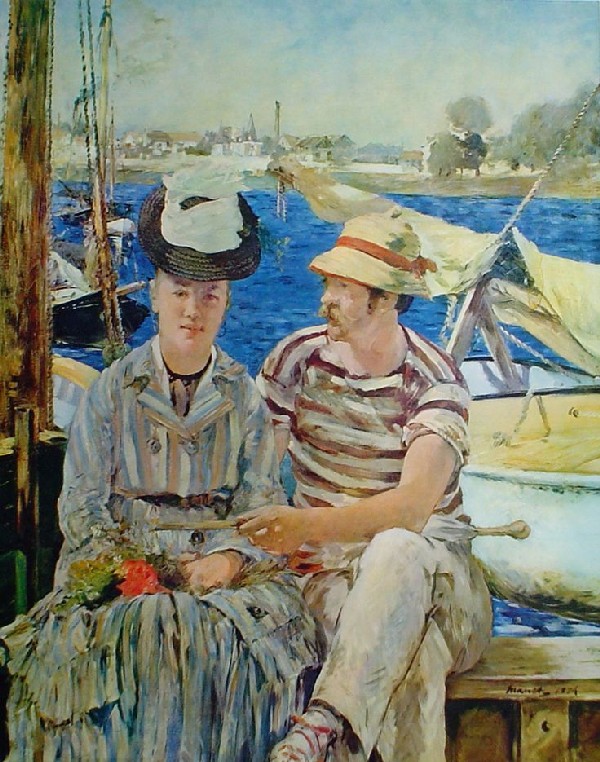 After viewing his son’s drawings, which he brought back from a trip, his father stopped doubting his artistic talent. He advised Edouard to go to study at the school of fine arts in Paris. But young Manet was afraid that the teaching would be boring, academic, and tough.

Therefore, in 1850, he began to take painting lessons in the Studio of the fashionable French artist-academician Tom couture.But after a few years of training, differences began to arise between Manet and Couture.

In 1856, he left the artist’s Studio and took up self-education. He often visited the Louvre, where he studied paintings by famous artists. Also, Edward traveled a lot in Europe, as a result of which he became interested in old painting.

In Italy, Spain, Germany, Holland, Austria, he visited all the art museums, after which he tried to copy the works of great masters (so does any novice artist). Titian, Rembrandt, and Velasquez had a particular influence on his approach to creativity. In 1858 Manet became famous in Paris as an artist. 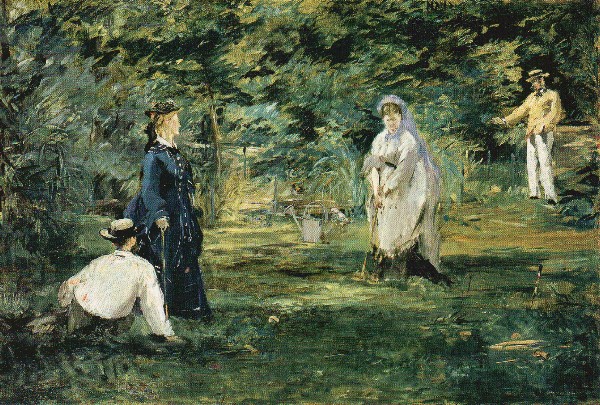 4. Critics called Edouard Manet an artist without imagination. He was accused of plagiarizing the old masters.

For Manet, it was important to give the new realities a value status, to raise them to the level of aesthetics. He wanted to show that this Paris, the people, are worthy to capture them in high art.

To raise everyday life to a new level, Manet turned to the artistic formulas of the old masters: Rembrandt, Rubens, Titian, Correggio and Caravaggio. In their language, he spoke of modernity, of the Paris that was around him.

His appeal to the old masters gave rise to accusations of plagiarism. Critics have written that Manet is, of course, an extremely talented artist, with a beautiful painting, but completely devoid of imagination. That he was forced to steal compositional techniques from the old masters.

(The Court Of Paris. Engraving by Marcantonio Raimondi based on a drawing by Raphael) 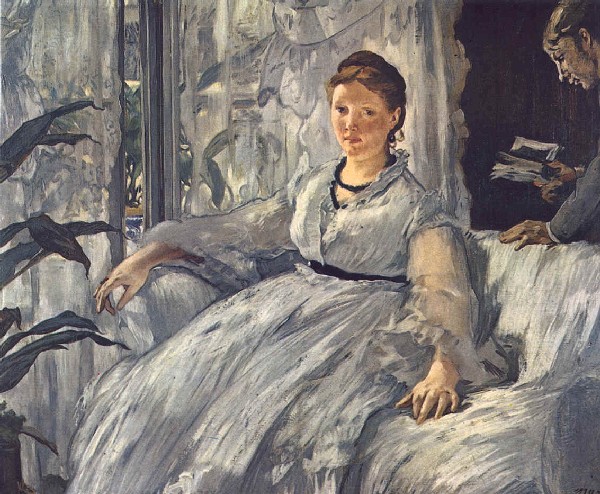 5. Two of the most famous Edouard Manet paintings were presented in the exhibition salon Les Miserables

In the early 60s, official academic exhibitions and salons became more and more scandalous every year. The academic jury of salons rejected everything that did not fit into the academic system. This resulted in a conflict.

Angry artists appealed to Napoleon III with a complaint about the salon and the actions of the “Minister of culture”. Napoleon III decided to open the salon of the outcasts in parallel with the official salon.

The main sensation of the first salon was Manet’s work “Breakfast on the grass” (Le déjeuner sur l’herbe). This picture has acquired a bad reputation. Critics were outraged by the Nude woman in the picture. She sits in the company of dressed men and shamelessly looks at the public, not ashamed of her nakedness.

Such reviews did not offend the artist, but, on the contrary, provoked. In the same year, he painted “Olympia“, which caused even more controversy. Critics called it vulgar and obscene.

After such persecution, the artist changed his creative theme and began to paint portraits, scenes at the races, still lifes, some important events in his life.

6. Edouard Manet is one of the founders of impressionism, who kept the black color in his works.

Edouard Manet is considered one of the initiators of impressionism. In many ways, being the inspiration of the Impressionists, Manet at the same time disagrees with them in some important points: in his works, he retains the constructive clarity of the drawing, rhythmically organizing the plane, leaves in his palette of gray and black tones and generally does not change the everyday genre with its literary and associative basis. 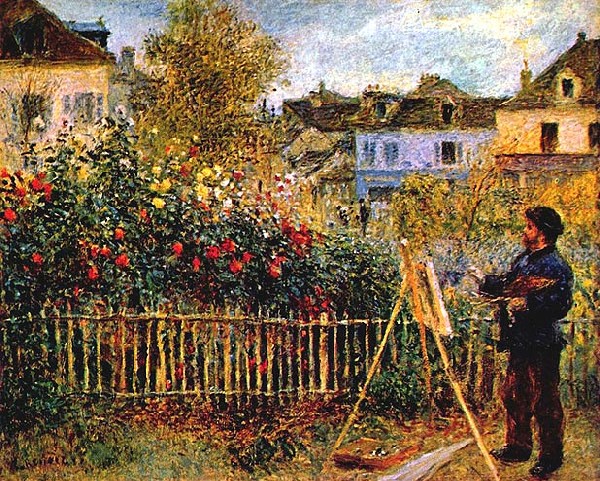 The artist chooses from existence only a fleeting fragment, trying to create a special feeling in the viewer that he is a witness to everything that is happening now.

In the paintings of Edouard Manet, the “randomness” of the chosen moment was specially emphasized by the composition, which abounds with cuts of figures and objects, suggesting in this case the possibility of continuing the image outside the canvas. 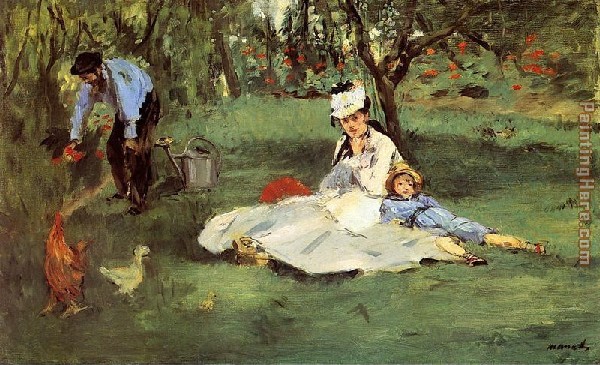 The space of the picture is permeated with light, filled with air. Manet, like the Impressionists, tries to paint in the open air, in the open air, the whole picture, sometimes he works with Claude Monet on the same landscape motif or writes a companion in nature: Claude Monet in his boat on the Seine (1874, Munich, New Pinakoteka). 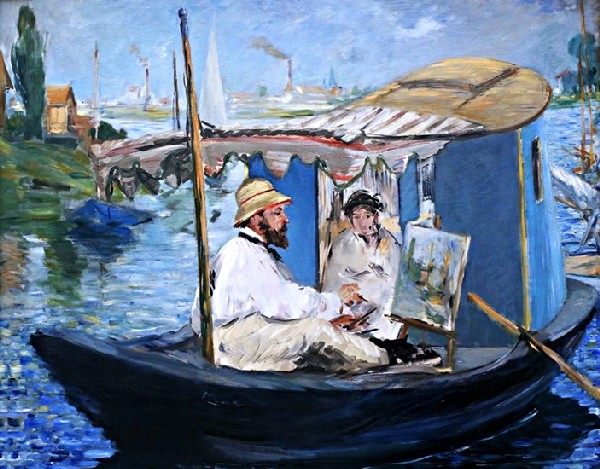 7. One of the most difficult paintings the artist makes in the year of his death.

Because he had cheated his wife often, the Artist fell ill syphilis and has very bad health for the last two years of his life. He could not make large paintings, but created a series of wonderful, small format, but beautifully written still lifes.

In 1882, the artist painted the picture “Bar in” Foley-Berger”. Manet creates his most complex, most amazing picture on the threshold of death. The most difficult thing in this canvas is how the picturesque space is constructed, designed from at least two points of view.

On the one hand, Manet paints a picture from the place where the person with whom the woman is talking is located. The second point of view is in the mirror, where the couple’s relationship is built in a completely different way. He looks down at her with an imperious manner. 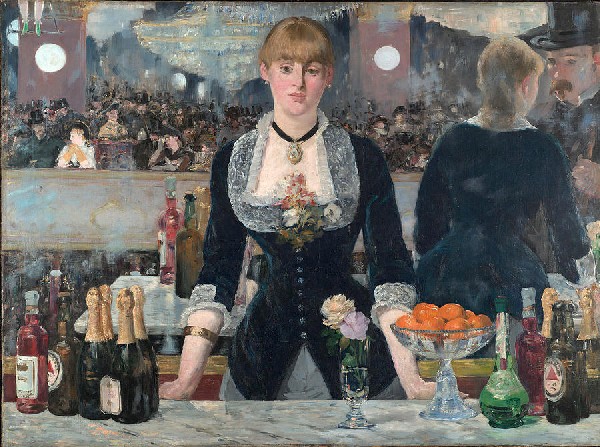 There is a feeling that the artist models a certain quasistate absence of the author, he builds it so there was a sense that there is no authorial intervention, if the viewer sees what’s happening through different eyes — the eyes of a man who really stands in the place of the spectator, the eyes of some visitor who watches the whole scene in the mirror. 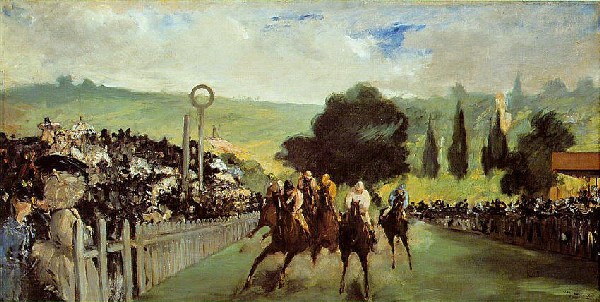 Theatres, cabarets, and cafe-chantans are places of entertainment; the Folie-Berger bar was one of the largest of these places, and their attendance entered very deeply into the ordinary life of a certain section of Parisian society.