Vincent van Gogh, the great Dutch artist, a bright representative of post-impressionism. His art career was short, but very productive: for more than ten years-about 2000 works. We present to your attention 10 interesting facts about the life of the artist. 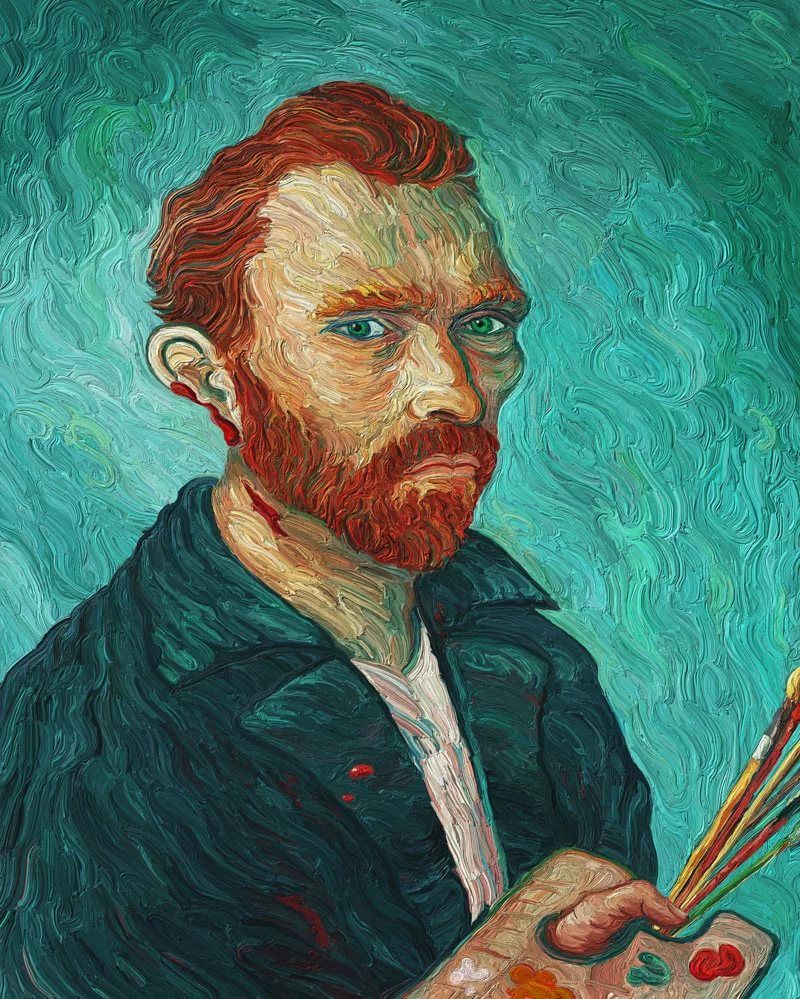 1. Vincent van Gogh wanted to be a priest, like his father and grandfather

All the children in their family were instilled with a love of religion from an early age. It was because the father of the family was a priest. In his youth, Vincent had wanted to follow his father’s footsteps, but to be ordained, he had to spend five years in a Seminary.

He was an impulsive man by nature, and it seemed to him that it was too long and unproductive. So he decided to enroll in an intensive course at the Evangelical school. This course lasted three years, including a six-month missionary in a mining town.

In the last month of living under terrible conditions, Vincent van Gogh realized that religion is not able to help in really difficult situations. During his sermon, on which he had been working for a long time, the miners had not listened to him at all.

Unfortunately, he understood these people, and knew that his words would not make their servile working conditions any less difficult. On his arrival back in Holland, he did not enter the Evangelical school. He went to his father and told him what he thought about it. After that, he no longer believed in the God he had read so much about.

Naturally, they strongly had a quarrel on this soil and never more spoke. A few years later, after Vincent learned of his father’s death, he painted a still life with a Bible and sent it to Theo. 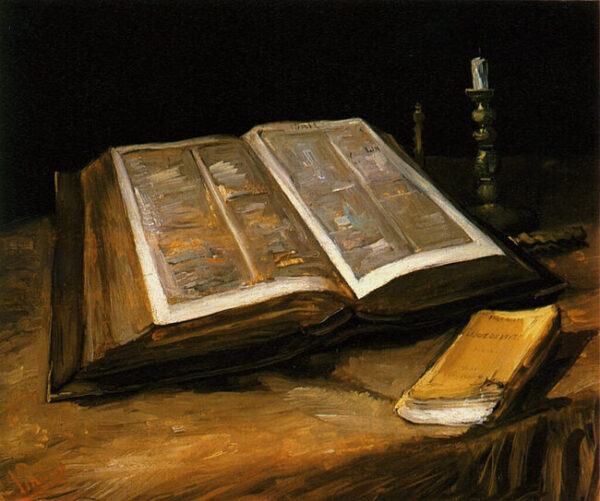 2. Vincent van Gogh began to draw at a late age

Vincent van Gogh very late began to paint, but very intensively, and under the supervision of knowledgeable people. In this he was assisted by the artist Anton Mauve of the Hague, who was a relative of him.

In addition, the experience that he had gained during the long-term trade in paintings in different cities of Europe was useful. He entered two different Academies of art, but a few months passed, and he did not regret dropping out.

He wrote to his brother that academic painting no longer appealed to him, and the knowledge of the old masters would not help in the realization of his plans as an artist. 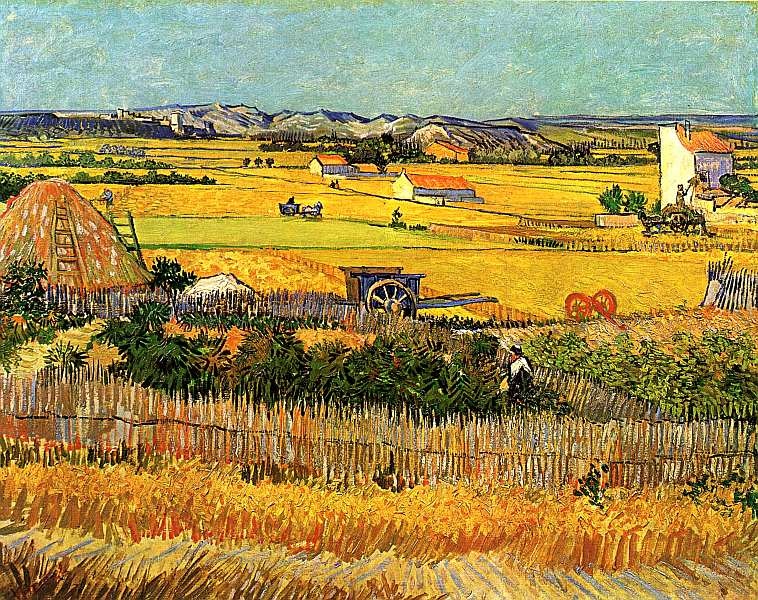 3. Sold more than one painting

It was believed that Vincent van Gogh and his brother had sold only one painting, ” the Red vineyards of Arles.” This is not so. During the life of van Gogh, he managed to sell fourteen of his paintings, while two still lives with sunflowers bought Vincent’s friend-Paul Gauguin.

If you go back to “red vineyards”, it really is the only picture that was sold for a lot of money. This generous buyer was a famous artist and philanthropist Anna Bosch. The purchase took place at a major exhibition of Impressionists.

Anna Bosch knew about the serious health condition of the artist at that time. He was in the hospital, and she wanted to support him that way. After Vincent’s death, she bought another of his paintings, but a few years later sold both paintings at exorbitant prices.

4. A business plan for the sale of paintings was developed

It is not surprising, because Vincent worked for a long time in galleries, and sold paintings to wealthy people. Accordingly, there are popular genres and styles that are best sold. And Theodore did own his art gallery in the center of Paris, and also understood how you can earn decent money on painting.

After Vincent’s arrival in Paris, he was introduced to a new genre — impressionism. He talked a lot with artists who worked in this genre, but soon because of the short temper, he quarreled with almost everyone. The brothers decided to work in the field of interior painting, which was focused on the middle class.

In that period all sunflowers were painted, and a large number of vases with flowers. Work in this direction was stopped by the same attack that led to Vincent cutting off his earlobe and being committed to a mental institution. 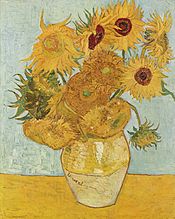 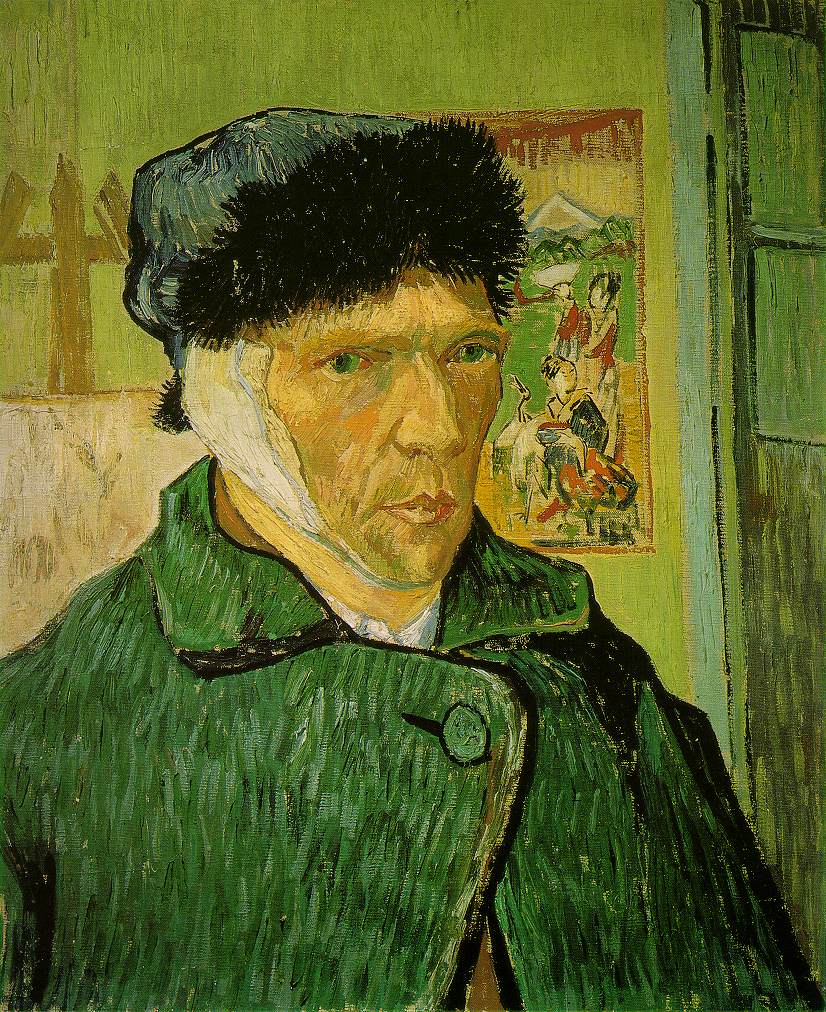 This is probably the most popular misconception, so I want to say this: Vincent van Gogh did not cut off his ear, but only cut off part of the lobe. After this action he went to the brothel in which he often rested with Gauguin.

The door was opened to him by a young lady who worked there, Vincent said to her: “take Care of this treasure.” After that he turned around and went home, went up to the second floor and went to bed.

Interestingly, if he had cut off a whole ear, he would have simply died of blood loss, because He was found only ten hours later. 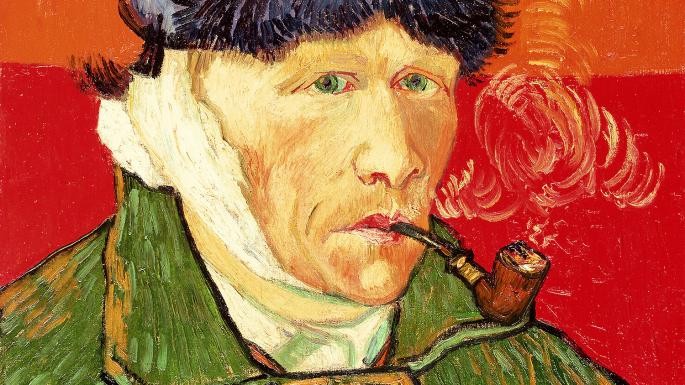 6. His brother kept him all his life

As soon as Vincent decided to become an artist, he immediately began to support his own brother Theo. Every month he sent money, it often went to three things: materials, food, and housing. When there was an unexpected waste, Vincent asked for more, detailing the reason.

When the artist lived in places where it was difficult to get paints and canvases, he made a list, and Theo in return sent him huge parcels. Vincent was not ashamed to ask for money, because in return he sent ready-made paintings, which he called goods.

His brother kept Vincent’s paintings in his home, where he brought potential clients, art lovers and collectors to try to sell something. 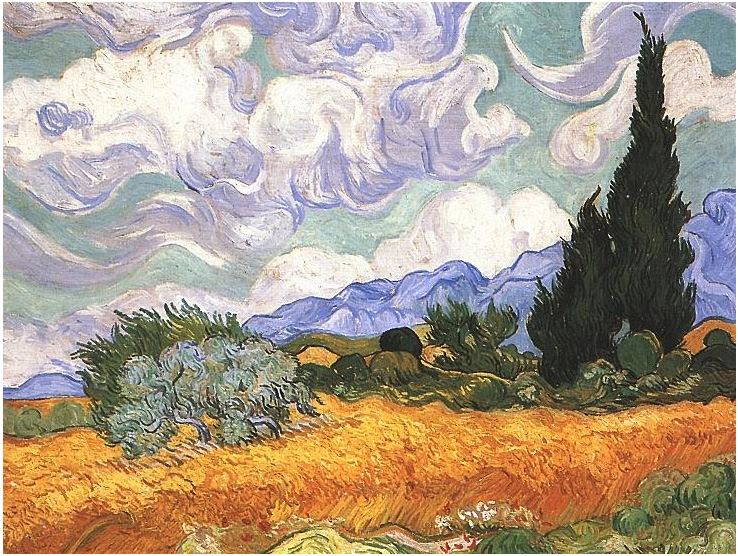 But it was impossible to make much money on such paintings at that time, so he actually supported Vincent. Every month he sent on 200 francs, to roughly understand that this for money, then I’d say, that in month for housing Vincent paid 15-20 francs, and a good book on anatomy cost 3 francs.

Here is another good example: the postman, who became famous as a friend of Vincent, received a salary of 100 francs, and with this money he supported a family of four people. 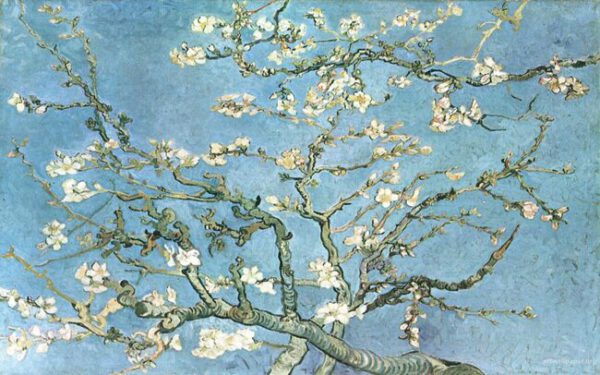 7. The confession came after death

Vincent knew all the serious artists of France since 1886, and to the best of their ability followed his work. It was impossible not to know about the artist, whose brother owned a large salon of paintings in the center of Paris.

Theo’s apartment was a personal exhibition of Vincent’s paintings for 5 years, it was visited by all the local artists of those years, including Claude Monet himself. By the way, at the exhibition in 1888, Monet very positively evaluated “Starry Night”, calling it the best picture of the show. 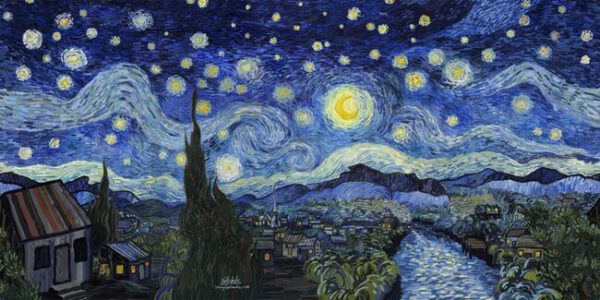 Interesting facts do not end there: the popularization of the van Gogh family in Holland was engaged in his relative, the famous landscape artist Anton Mauve. Anton, in turn, was acquainted with one of the best landscape painters in Holland Johan Hendrik Weissenbruch.

They even had a meeting where they discussed Vincent’s talent. As a result, they agreed that the guy really has the potential and he can achieve great results. When Vincent learned of this news, he finally realized that he would become an artist, and from that moment began to make one picture or drawing a day.

It is difficult to imagine that people in those days did not even know about the catastrophic harm of absinthe. France in those days was the capital of absinthe, it was inexpensive and was very popular among creative people. Vincent was incredibly fond of the drink, and dedicated a neat still-life portrait to it. 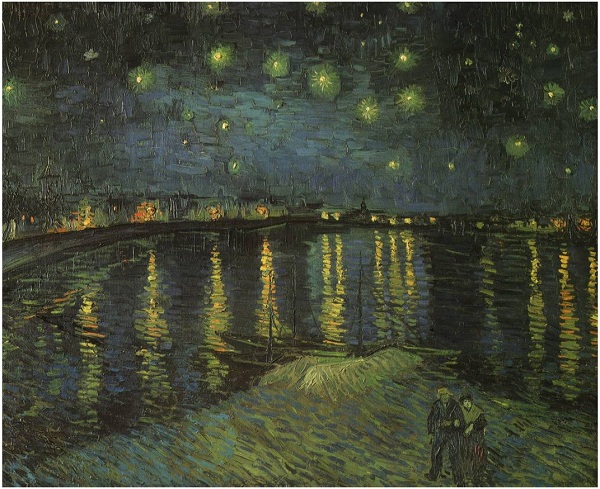 Even the situation was aggravated by smoking, the last 10 years of life, he did not part with the tube. In the letters to his brother, he said that this way satisfies the hunger that haunted him constantly. This way of life has given its generous “results”. 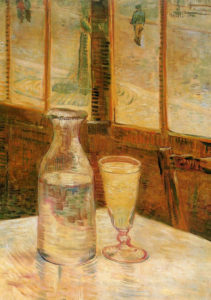 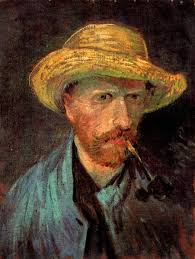 9. Worked only with the best materials of those times

The brothers were very well versed in art goods because they were firmly in the environment of painting. Due to the fact that Vincent used only high-quality paints, his paintings are so well preserved to this day. In the online Museum from Google, you can see in detail any picture, it is visible every stroke, appreciate its purity and brightness.

These paintings are more than a hundred years old, and they look like new, cracked only a few. What remarkable is, he never created oil paint from pigments and bought only ready-made in tubes. In contrast to his friend Paul Gauguin, who was an adherent of the old approach to the production of artistic materials. 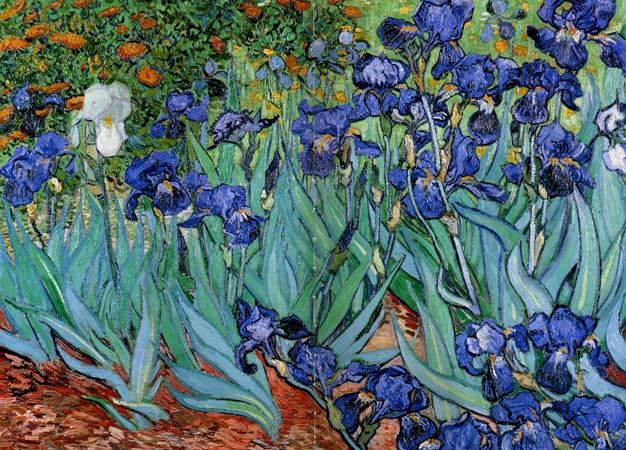 Some people mistakenly believed that, his last work was ” Wheat field with crows.” But it was “Wheat field under  clouds”

In 1890, Theodore’s entire family fell ill. The most important thing, it was also including the baby. In this regard, he had less time for Vincent, and the brothers began to gradually move away from each other. Theo sent him less and less money, and described in detail how difficult it was for him.

Vincent often thought about suicide in the last year of his life, and was deeply disappointed at how badly things were going. One day he decided that he had become too much of a burden.

The biography of Vincent van Gogh, the great artist is rich in interesting facts, most of which he himself told in correspondence with his brother Theo. Thanks to these letters, we know what kind of man Vincent van Gogh was.